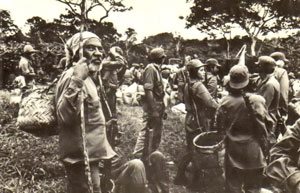 Written in 1989. Originally staged by the RSC.

Initially known as Campesinos, this is Nick’s ‘play for Nicaragua’. Its main themes are about growing up to be a man in a violent world; about having to decide why to kill before you know why to live.

The play was directed by Roger Michell and staged by the RSC. As part of his research for the play, Nick travelled to Nicaragua during the war and wrote a moving diary about his experiences, which was later published by Nick Hearn Books.

‘A provocatively acted series of alternately disturbing, pathetic and blackly comic scenarios that makes the point that the warring factions in Nicaragua are as cruelly divided by US jingoism as they are ironically united in the belief that the Pope is on their side. And that in itself is reason enough to go.’ – Time Out