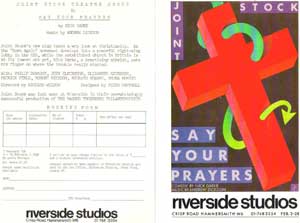 Set in the time of the Roman Empire, and based on an interpretation of the teachings of St Paul. Takes a wry look at Christianity as the ‘Born Again’ movement develops into a powerful right-wing lobby in the USA, while the established church in Britain is at its lowest ebb yet.

As a practising atheist, Nick Darke, puts his finger on where the trouble really started. The play was first directed by Richard Wilson and featured seven actors.