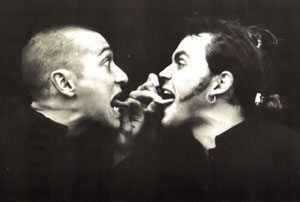 What would you do to save the planet?

Two eco-warriors are caught trying to blow up an open cast mine. Risk, play and skilful complicity are engaged in this strange double act. The play explores Nick’s commitment to environmental issues as well as his gift for comedy.

“Risk, play and skilful complicity are engaged in this strange double act.”

ELF
That is the liquid oxygen tank Marvin, you see what I was saying? When it goes we are gonners.

He sits cross-legged beside MARVIN

Why worry? It is good to die since death is part of life. What has been is what will be and what has been done is what will be done and there is nothing new under the sun. The industrial empire is a cancer on the earth and the suffering of the planet far outweighs this little Elf! I am here to sabotage the destruction of a wilderness! Why? Why throw away a life, two, three four lives for the sake of a wilderness?  Because it is my duty to protect a wilderness for its own sake! And if I die? Individual suffering is less important than the suffering of an eco-system!

He checks his watch

He tries the door. it is securely locked

Marvin. Since we have so little time left I wish to make a confession. I am a deep ecologist, that goes without saying. I don’t use motor-driven transport. I don’t burn fossil fuels. I take the side of nature over culture. I believe in the defence of the wild, the natural and non-human, all animals have an equal claim to Mother Earth, an equal right to dignity. I am, therefore, naturally a vegan Marvin. What else?! But it wasn’t always so. I was once a voracious consumer of butchers’ meat!

He takes from a secret pocket deep within the bag, a string of sausages

These are my favourite sausages. I was never able to forgo them. I would last for perhaps three days then my taste buds would explode for want of a sausage. I would find myself in a trance heading for the abattoir. Knock knock on the back door.

A SLAUGHTERMAN holding a cleaver, plastered in blood and entrails opens the door
He calls over his shoulder:

He produces a sausage from behind his ear and holds it tantalisingly above ELF’s head
ELF slavers and whimpers
The SLAUGHTERMAN sings a song:

ELF kneels and clasps his hands.