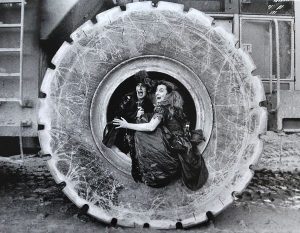 When an assassin’s bullet lands Arthur May, President-Elect of the USA, six feet under, John Sty dons his persona and depasrts Springville, Utah on a one-way ticket to Koyt, Kernow.

From the depths of a Utah tomb to a Cornish catacomb, Nick Darke’s startling new play is a pan-Atlantic tragicomedy of murder, corruption and missed nuptials.

JOHN SHY – thin, undernourished, dressed in rags
His lamp illuminates a row of human skulls
He lifts one down, blows the dust off and inspects the jaw
He plucks a gold tooth out with a pair of pincers

JOHN SHY Y’don’t have to tell me it’s a sin to rob the dead but I’m starving. If half these brain-pans was alive they’d give me their gold teeth outa compassion.

He draws another tooth

A VOICE calls from above
JOHN SHY recoils

VOICE (sings) Sing from the chamber to the grave,
I hear the dying miner say…

VOICE (sings) A sound of melody I crave,
Upon my burial day.

JOHN SHY There’s three or four hundred corpses round me and one of the bastards is singing a song.

JOHN SHY That’s a mortal voice. He ain’t dead. Yet.

SONG (scherzo) Once there was a man
Who called himself John Shy,
But that is not the name
That you will know him by.
Which is just as well
Cus John Shy was a loner
With nothing to him till he took
Another man’s persona.

Above ground, ARTHUR MAY lies dying in a ditch

JOHN SHY Somebody put a bullet in him and I ain’t at all surprised cus this guy is one prime bastard. Bin assassinated. Look at his stomach. Flensed and raw like the meat deck on a whaleboat.

JOHN SHY What is it Governor?

Arthur had some breath left
To ask John Shy a favour-

ARTHUR (adagio) I’m on my way to Kernow
To visit my old mother.
I wrote her I was coming
And I can’t let her down,
Wear my coat, say you’re me,
Go to my home town.
If you can keep your nerve,
They won’t know your face,
I was no more than a child
When I was taken from that place.

JOHN SHY His mouth is open but he ain’t gonna sing no more.

JOHN SHY Why should I do as he asks? He was Governor of Utah! Never did a god-dam thing for me. I don’t owe him any favours at all. Visit Kernow? Where the hell’s that? Go see his mother? Some old bitch who’s expecting her son, a little boy who left home all those years ago, to pay her one final…one…before she…aw shit! The last wish of a dying man. To call on his mother. That’s something. Boy I don’t care if he’s a friend or foe I’m a man of integrity and I will honour that wish.

The transformation is complete,
John Shy is no more,
And Arthur’s journey started
Towards a distant shore.
Bound for a town in Kernow
Where Arthur May was born,
A desperate town, a lawless town,
Where good days fear to dawn.

BIDDICK Stay where you are mister! If you value your life!

BIDDICK She’s mixin up the nitroglycerine.

BIDDICK Loosen the flange bolt on the acid inlet before you run the water!

BRINEY (within) I done that!

BIDDICK Did you pipe air up through the agitator coils?!

BIDDICK Shall I announce your arrival?

JOHN SHY Who to?

JOHN SHY Where am I?

JOHN SHY Koyt. Strange place, no bones about it.

BIDDICK Governor is it?

BRINEY E said so on ‘is letter.

BRINEY The one you wrote to my late husband.

JOHN SHY How did he die?

JOHN SHY Let me see that.

BRINEY (handing him letter) It was the last thing I ever read to im.

BIDDICK Forgive us our grief.

BRINEY We only burned im yesterday.

ALICE I wanna stick a dynamite!

BRINEY A dynie madam? What size?