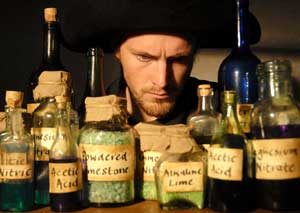 This breakneck new comedy charted the rise of one of Cornwall’s most famous sons – pre-eminent scientist, pilchard addict and Penzance boy, Humphry Davy (perhaps better known as the inventor of the ‘Safety Lamp’ used by miners, and the intoxicating conction-cum-anaesthetic of nitrous oxide, aka laughing gas).

Set on the eve of Humphry’s legendary lecture at London’s Royal Institute, the play charts Humphry’s story from his humble beginnings as a lowly chemist’s assistant to one of the most brilliant minds of the 19th century. The play featured a cast of characters including the poet Samuel Taylor Coleridge, the revolutionary Joseph Priestley and the head of the Royal Institute, Count Rumford (who also invented the fabled kitchen appliance known as the Rumford Stove).

The play was originally commissioned by the National Theatre but Nick abandoned it when he had a stroke. He then picked it up again for the Cornish film and theatre company o-region. He had worked out the plot and the characters but written very little dialogue. He worked on it with friend and writer Carl Grose until his death in 2005.

Carl later finished the play later that summer, and the production went on two regional tours of the southwest during 2005 and 2006.