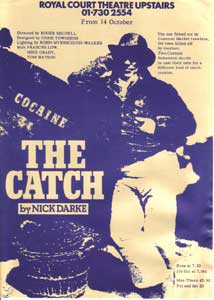 Written in 1981. Originally performed at The Royal Court Theatre Upstairs.

The sea fished out by trawlers, the town killed off by tourism. Two Cornish fishermen decide to cast their nets for a different kind of catch: cocaine.

SWIDDLES goes to the window and looks out. Looks at his watch. LEADWELL goes to the scullery for more toast.

LEADWELL Where we gonna shoot they pots.

SWIDDLES An lose em. Git trawled up be the fuckin frogs.

LEADWELL Thass where the lobsters are. They idn crawlin.

SWIDDLES They id’n crawlin cus the grounds is getting churned up be the trawling.

LEADWELL Can’t elp that Swids, thass a fact a life. Can’t sit ere an bemoan the common market. Git our there an tangle with em.
SWIDDLES Bastards.

LEADWELL Ad a shindig up the lifeboat station ‘smornin, in the crewroom, ad the news we’d lost the vote up Brussels, no to the twelve mile limit, Peeler said blockade the ports, stop em landing, I said whass the point a that, wun’t last, Gilbert said e felt militant, I said we all do e said there’s bugger all else we can do, Delwyn said blockade the navy up Devonport, Peeler said go on strike an I said whass the point a that we idn’ catchin nothin anyhow what difference do it make.

LEADWELL I said the only thing we can do is refuse lifeboat assistance to French trawlers working inside the twelve mile.

SWIDDLES Can’t do that boy.

LEADWELL I said thass all we can do. That a git national coverage, Gilbert said there’s the RNLI principle at stake.

LEADWELL I said times are chagin. Values are changing. Principles dun’t mean nothing in the world no more.

LEADWELL Bloody true man. Tis a changin world. Gotta save your own skin. Survival. Thass what we’m talking about. Takes months t’organise a blockade, be too late then, cus they’m killin immature fish. They got casualties occurring everyday out there this time a year, id a make the eadlines tomorrer, ‘Lifeboat Cox Refuse Assistance to French Trawler Fishin Leb’n Mile Off the Coast’.

SWIDDLES The whole bloody institute was founded on if you got a man out there an e radio assistance you launch no matter what ‘is persuasion no matter is religion or politics, six toes or glass eye, you git out there Leadwell.

LEADWELL Your livin. You think they frogs got scruples? They knaw what they’m doin to e. They knaw. Bloody French ab’m got a word in their language for scruple. Everytime e shoot is trawl e’m killin lobsters e knaw that. E could fish is own waters but the pounds strong an e git a better price over ere. Thass all e care about. E dun’t give a fuck about you and me breakin our backs over one lobster to a string a pots. Break is leg an e oller for the lifeboat an we toddle off to the bugger. Tis weak. Soft as sand. Clear as daylight to me. Make a stand.

LEADWELL Thass zactly what I said.

SWIDDLES You’m riskin your life to save a man who’s ruinin yours.

LEADWELL There’s a world fulla Goggo’s out there Swids, ready to scalp e. Got arm yourself man. Or go under.

LEADWELL Gilbert said if I mooted it again I was off the crew. Back on the slipway.

LEADWELL I bloody meant it boy. I bloody did.