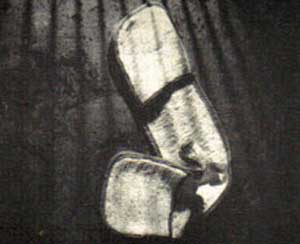 Written in 1986. Originally performed at The Bush Theatre, London.

A writer’s experience in the screen trade. A playwright has a screenplay set in The Greenham Common peace camp given the Hollywood treatment by a young producer.

GARSTANG Ah. Sandra’s nice. Winston is in a different way. He’s brusque and he sounds stupid but he really is alarmingly clever. Startling sometimes. Iconoclastic. I use the word sparingly but you can apply it to Winston most days of the week. (indicates script) This one of yours?

GARSTANG The Oven Glove Murder. Mind if I…

GARSTANG opens the play somewhere in the middle and reads four lines
He emits a loud, false sounding guffaw and shuts the play

JOEL (without looking up from contract) Read it ave you?

GARSTANG Took a squint yes. Ha! I read the bit where the chicken is plunged into the tumble dryer when Lady Rickeard walks through the door unexpectedly dressed in britches and a riding crop.

JOEL looks up from his contract

JOEL Yes. Written from the man’s point of view.

GARSTANG I was going to say, written from a man’s POV. Are you saying that until society changes its attitudes towards women the concessions men give to women will be unacceptable to most men?

JOEL How did you know that?

GARSTANG O that much is obvious from the title.

JOEL I don’t accept that men necessarily have to concede anything.

GARSTANG Y’mean they havn’t or they don’t.

JOEL I mean they don’t have to think they do. In an equal society everyone gains. No-one concedes.

GARSTANG But you don’t show all this.

JOEL I start from the point where bugger all’s happened yet.

GARSTANG I’ve heard of you havn’t I? Didn’t you have a play on at the-

GARSTANG Yes. I was going to see it. But I didn’t. Sorry.

JOEL You’re not the only one.

GARSTANG Mother had a blood clot.

GARSTANG In her left leg. Very disarming. Her right leg. She’s always been something short on her left side on account of the polio she suffered when a small child. So she limped. Then the blood clot came along and somehow evened things up. She has a perfect gait for the first time in her life aged sixty-eight. She re-married. You’re bound to meet her.

JOEL To think all that was taking place while I had a play on at the Barbican.

GARSTANG Did it do well?

GARSTANG What was it called?