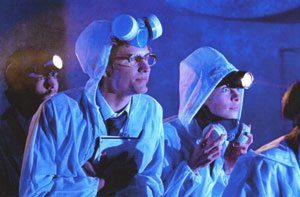 Written in 1992. Originally staged by the RSC as part of The Antigones Project.

One of six new plays based on the final play of Sophocles’ Oedipus Trilogy, The Thebans.

Each group of young people took part in improvisation workshops. Nick took his inspiration from the sessions. They were performed locally and as part of a major festival in Stratford.

The play was later performed as a site-specific production by Kneehigh Theatre in the claypits near St Austell, involving members of the local community.

Enter BUTCHER, STEAK, MINCE, LIVER’N ONION and SAUSAGE. They all wear bloodied butcher’s aprons and carry buckets with bits of JOHNNY THROTTLE in them. They place them on the table and stand to one side. Zeus jumps and paws at the nearest bucket.

PSEUD
What’s in the bucket Duke?

A silence, whilst the paparazzi contemplate the thought of human flesh in the buckets.

DUKE
I put out an order to pick up all his bits.

BUTCHER
They was strewed right across Cornwall.

STEAK removes a small round object from her pocket and held it up.

STEAK
I found his kneecap embedded in a telegraph pole the other side of Menacuddle.

She plops the kneecap into a bucket.

The bucket-bearers are silent. They shuffle and look at one another.

DUKE
Well? Answer the question. Is there any part of Johnny Throttle missing?

The paparazzi are so excited they break into song:

DUKE
It’s nothin’ to write home about, it’s stuck up in a tree no doubt-

BUTCHER
No. We had it in a bucket fulla bones.

PAPARAZZI
You had it in a bucket fulla bones?

SAUSAGE
I was the one who was guard; they said you look after that. The bucket was there, stood on a chair, right next to where I sat.

PSEUD
It was taken from under your nose?

DUKE
Don’t be some damn preposterous, It id’n no great loss to us-
SAUSAGE
They’ll use it as a trophy I suppose.

TRUTH
You gotta get it back

PAPARAZZI
You gotta get it back, what d’you propose?

Duke stands and picks a bucket off the table. He dredges round inside it and produces a shin.

DUKE
This ere is Johnny’s shin.

He holds the bone above ZEUS’s head. The dog barks and slavers.

The photographers aim their lenses at ZEUS. DUKE drops the bone and the dog attacks it. The cameras click and flash furiously.

The paparazzi scribble DUKE’s words. As he speaks his advisors join in, one by one, and their words become a sinister mesmeric chant.

DUKE
Whoever took Throttle’s foot, if you want the rest of im he’s up amongst the furze on Hell’s Mouth Cliff.

+ IRAQI
So before the crows and gulls pick and wrench with vice-bills at his flesh;

+ PAPAL EDICT
Before they open-throat his strips of skin; before they gulge and gurgitate him down and spew him stinking out across the sand:

+ FOGOU
Before the pack-dogs crunch and salivate his splintered bones; before they yelp his tongue-hot soul across the vacant sky –

You better come and get him.

The buckets are ranged amongst the furze on the cliff.

The wind blows hard across the sea, gulls and fulmars wheel and screech. A skinny DOG lopes up, panting. It noses round the buckets, knocks one over and spills putrid flesh and bone across the turf. Immediately a frenzy of gulls and crows swoop and fight over the carrion, wings beating and screeching. A pack of dogs slinks up and they snap at the birds who in turn mob them.

GONNIETA arrives and wades amongst the animals and buckets. Birds peck at her and the dogs bite her heels but she beats them back with a stick.

She unfolds a Kernow flag, white cross on black ground, gathers the buckets, empties them onto the turf and covers the contents with the flag.

She weights the flag with stones, heaps turfs and rocks onto, building a pyre and offering incantations to nature as she does. Gulls and crows circle and swoop, dogs growl in the shadows.

When she has built the pyre and blessed the remains of her brother, she takes from the bag his foot and places it on top of the stones.

She stands back and views her work, lit only by the rising moon.

Suddenly she is bathed in torchlight. Strong beams flash all round her. The dogs and crows vanish.

BRIGADIER ROTHENKOPF speaks from a distance through a megaphone.

BRIGADIER
We have you surrounded. Don’t attempt to resist. You are under arrest.

GONNIETA stands proud. The torchbeams pin her to the spot. BRIGADIER emerges from the shadows.