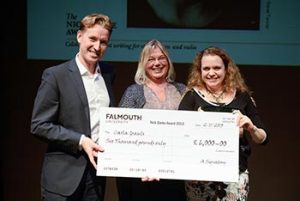 Carla, who develops scripts for stage and screen, enjoys recognition in Italy, South Africa, America and the UK. Previously long-listed for the Verity Bargate Award, she won the Euroscript Screen Story Competition in 2009 and was selected for the Puglia Experience Screenwriting Fellowship in 2011.

Her play Made For Him bridges social satire and science fiction depicting a world in which women are customisable for male buyers. Judges commended her work’s, “great comic potential as a utopian / dystopian vehicle through which to explore sexual politics.”

Delighted to win the Award, Carla commented: “I’m really thrilled to have won the Nick Darke Award. I didn’t think Made for Him, my futuristic, feminist dark comedy would have a chance. When I was watching the extract from The Dead Monkey (written by Nick Darke) at the awards ceremony I felt an affinity for the piece and privileged to be in the company of a writer like Nick.”