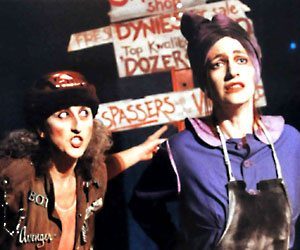 Written in 1987. Originally staged by the National Theatre.

This major play was set in 1815, and was a reworking of one of Nick’s earlier works, The Earth Turned Inside Out. It explores the lives of a Cornish community whose two lives are dominated by the boom and slump of the local mine, and was first staged by the National Theatre, before later being performed by Kneehigh Theatre. The play features a cast of 21 which can be doubled up by 8 performers.

The play is published in Nick Darke: Plays 1 by Methuen.

‘A meaty play…seethes with life, wit and ideas. Darke gives shape to a Cornish identity that feels vital and real and has nothing to do with clay pipes and clotted cream. Like Cornwall’s coves, it has many unexpected depths. The piece acts as a critique of capitalism. It also raises questions about the points where justice, conscience and the law part company.’ – Financial Times.

The revised version by Kneehigh featured the following performers: