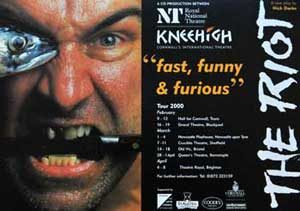 A play about the ‘Sabbath Riots’ in Newlyn, Cornwall, in 1896, when the fishermen demonstrated violently against the Sunday fishing fleet from Lowestoft. The cast features 18 characters can be performed by 12 actors.

‘Its language is rich and its staging is brisk, with lots of doubling of parts, choruses round the harmonium, and rapid interweaving of varied strands of action….. It touches on the collapse of the tin industry; contains a graphic portrait of angry, pipe smoking Cornish women who, used to breaking ore at the mines, turned reluctantly to domestic service.’ – The Observer

Maude throws down the silver, takes a plug of Bogey Roll from her apron pocket, puts her feet up on the table and fills a pipe

SARAH (hunting for things to eat) I couldn’t rouse ‘is mother. She might be dead but I left er breakfast with er ‘case she wake up peckish. Goin riot? Myra’s down arbour cus she wanna see the fish, Sally went Union and Betty’s gone Cross cus she reckon the Yorky’s gonna muster I said Yorkys dunt wanna fight. I said you wanna get on Lariggan bridge cus if our buccas march on Penzance the Penzance mob int gonna let em past that bridge. If there’s gonna be a battle twil be on the bridge. So I’m goin bridge.(watching Maude light her pipe) Bin wi’ Jumbo? (no reply) Down quay? (no reply) Last night? (no reply) Filthy bitch.
Maude smokes

SARAH Didn’t say it but ya meant it.

MAUDE All mean did to you dun it.

SARAH Well did ya?

MAUDE Too strong for ya? Yorky tobacca thass why. Come across from Russia. Duty-free. Bogy Roll. Best there is. Don’t get Black. Black’ll kill ya. Black’s deadly. Black’s black as a dog’s gut. Tis only good for chewin but they d’smoke it. Jumbo. Porky. Spindle. Tin Tack. Cronjie. Yorky boys.

HARRIET Go wi’ Yorkies do ya?

MAUDE No. One Yorky. Jumbo. Alright?

They smoke
Harriet gets the hang of it

HARRIET Duchess is nothin, we ad a prince up Botallack.

HARRIET Father shook the bugger’s ‘and.

She hands the pipe back to Maude, who smokes

HARRIET Thass where me brothers is.

A short burst of African drumming

HARRIET E’s the dead one.
(sings) Israel, in thy youthful prime
Hast leapt the bounds of time,
Suddenly from earth released:
Taken to an early rest,
Caught into eternity
I wish you was down ere with me.

MAUDE How did e die?

HARRIET E shut down Botallack Mine. Me brothers ad no work. They went Bulawayo. Israel died.

HARRIET Bloody Queen knaw all about it.

HARRIET E was mentioned in despatches.

The Queen (Bolitho) inclines her head

COURTIER Tell ‘er Majesty all about it.

SPRECKLY On Saturday morning last a battalion of troopers under my command was sent to look for rebels. We found em! My men crossed the Donga, opened out in skirmishing order and charge!

200 troopers on horseback gallop through the bush
The drumming increases

SPRECKLY The natives fled. Rifles were discarded by my men who used revolvers for close-quarter work.

Revolvers are drawn from inside tunics –

SPRECKLY We shot em up trees, in bushes, down ‘oles. Four hundred rebels were killed outright.

QUEEN Any fatalities on our side?

SPRECKLY Yes Ma’am. One. As plucky a little bugger as I’ve had privilege to command. But e was a conscript ma’am, recruited over there from the mining community, so e ain’t cost us nothin.

SPRECKLY Screetch. Israel Screetch. He was advancing at the head of a column on the Westward side. Driving the enemy back with his revolver.

BILLY Matey picked a fight wi’ John Clemo in the Union. They beat the shit out ob’m –

High up a Matabele can be seen holding an assegai aloft, poised, muscles tense
The Matabele hurls the assegai

SPRECKLY Through the neck, ma’am.

Israel falls at Harriet’s feet, a spear through his neck

BILLY Yorky chap e argued wid about the fishin, Clemo scat’n one and e didn’t knaw John was a cripple cus e’s from Mousehole so the Yorky it’n back and that was it.

MAUDE What the hell is a Yorky doing in the Union?

BILLY (lifting the hem of his garnsey, several packets of tobacco drop to the floor) Sellin this.