The King of Prussia

The King of Prussia 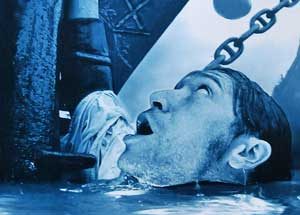 This major play was based on the lives of the ‘free trading’ Carter family who lived in West Cornwall at the end of the 18th century.

‘A meaty play…seethes with life, wit and ideas. Darke gives shape to a Cornish identity that feels vital and real and has nothing to do with clay pipes and clotted cream. Like Cornwall’s coves, it has many unexpected depths. The piece acts as a critique of capitalism. It also raises questions about the points where justice, conscience and the law part company.’ – Financial Times

Download extract of The King of Prussia Play Extract

The deck of a schooner is revealed as the sun rises and slowly burns off the mist
A solitary deckhand sings unaccompanied a quiet, haunting song:

SONG Dawn breaks and no day was finer,
Our schooner lies anchored
Fresh home from China.
Stood out four miles
Due west of the Lizard
The crew, ocean-weary,
Yearns for the shore

LOOKOUT Lugger! English! Two miles to larb’d!
Gathering on us with all sail before!

CAPTAIN That’s our man. The King of Prussia.

JOHN CARTER is received on deck by the CAPTAIN

CARTER Did ye pick up any liquor on your voyage home.

CARTER Lets feel the strength of it.

He watches the CAPTAIN give orders to the SUPERCARGO

CARTER This is me brother’s job but e’s in gaol so I’m doin ‘is job on toppa my job which is two jobs too many don’t ya think? What’s your price?

CARTER I wouldn’t give ya five for Jack. I’d consider four for Geneva but Nantz? Three’s generous. In fact you’ve talked me out of three. Two or nothing. Geneva three. Four the Jack. What did we agree, one?

CARTER That was Geneva. And three pound for jack.

CARTER So you have Jack!

A barrel is brought

CARTER You offered me two! I heard you say it. Come along Cap’m I’m a busy man willya shit or get off the pot?

CAPTAIN hands a measure of brandy to CARTER

CARTER (studying the contents of the measure) It ain’t Geneva.

CARTER That we do know.

CARTER drains the liquor and hands the measure back

CAPTAIN This is jack

CARTER It ain’t geneva so we’m down to jack and nantz.

CARTER I arn’t so sure either Cap’m. Could be nantz could be jack. Now I’m prepared to take the risk and pay y’a pound a tub for what might turn out on closer inspection not to be Geneva not to be Jack but Nantz.

CARTER Good! Thass more like it. (he shakes the CAPTAIN’s hand) Have y’never dealt with a free-trader before Cap’m?

CARTER First thing you gotta learn is a free trader’s an honest man cus e d’break the law. And if you break the law you gotta be honest. If I offer you a pound then a pound is a fair price.

CAPTAIN How many d’ye want?

They watch the unloading

CARTER See the gannets fishin Cap’m. There’s always one oo range high and wide. Huntin while the others dive. Thass me.

HARRY CARTER stands at the window with his back to the door
He works with a backstaff, shooting at the sun

SONG Here sits a man denied liberty
A sailor who’s accustomed
To roaming the seas
Here sits a man innocent of crime.
Locked in a prison cell
Biding his time.

The door shuts behind CARTER

HARRY That you John?

CARTER Gather up your stuff.

CARTER Got the Stackhouse party workin with us.

CARTER I bought ten ton off the China ship?

CARTER She’s took it to Bath and flogged it for six.

HARRY stops what he’s doing to reflect on this

CARTER Tis all gone for profit. And I tellya somethin else. She a be pushin for less pay for the farmers. We’ll have a riot on our hands. And all that goodwill built up over years gone for nothin.

He knocks on the door to be let out

Guard! See what she gotta learn is there’s a network of folk whose dependant on each other. And they all give and take. And the minute there’s one oo start to get greedy then the whole damned network’s busted. Guard!

He bangs hard on the locked door

Why d’e lock the door? Guard! Whass the French for guard?
Whass the boy’s name out there?

CARTER (shouts) Albert! Where be to! Venez y!

He rattles the door but its locked

HARRY Got all the papers?

His voice echoes down an empty corridor

The GUARD and HARRY speak French

CARTER No? E say No?

CARTER waves the Governor’s letter at the GUARD

He passes the letter through to the GUARD, who glances at it and hands it back

CARTER What the fuck is goin on!

CARTER How long we bin at war?

HARRY Half an hour.

CARTER sits heavily onto the bench

CARTER How long’s it gonna last?

HARRY How long was the last one.

CARTER I’ll be dead. So will you be cus I willa killed ya.

HARRY You gotta find something to occupy yourself. Like Cain, oo built a city in ‘is mind.

CARTER Built a city did e?

CARTER concentrates
HARRY unpacks his bag, meticulously laying out his belongings on the floor

CARTER She’s done this. Stackhouse. She got war declared.

CARTER O yeah. You bet your life. God elp the business now. I knew I couldn’t trust er. She’s got me out the way. Whatever possessed you in God’s name brother to put into St. Malo with no papers?

HARRY I’m learning how to navigate.

CARTER Where from? One enda the cell to the other? (at door) Guard!

HARRY Don’t harass im. E’s the only friend we got.

CARTER slumps in the corner

HARRY Approaching Plymouth Sound from the Westward
Give Penlee Point a berth of half a mile.
Bring the red obelisk on the Hoe
In line with Plymouth New Church.
Keep that mark on til Cawsand’s open.
Steer East until the New Church appears
Between the red beacon and the western end of the Citadel.

CARTER Wanna cut me ‘ands off while you’m at it?

CARTER We in’t on the bloody deck. Thanks to you we’m locked up in a cell!

HARRY Out of consideration for your brother and fellow prisoner. Please.

CARTER I can’t even swear.

HARRY Start with the people.

HARRY opens his bible and reads.