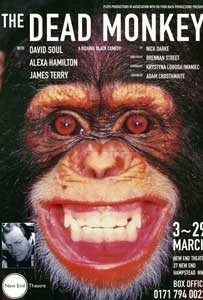 Written in 1986. Originally staged by the RSC (Royal Shakespeare Company)

A play about America set in America. The action takes place in a shack on a beach, and explores the story of a couple who have seriously lost the way in their marriage.

The Dead Monkey is one of Nick’s most popular plays and has been staged many times all around the world, including a major revival featuring David Soul in the title role. The play was originally produced by the Royal Shakespeare Company at the Barbican Pit in 1986.

The play is published in Nick Darke: Plays 1 by Methuen.

‘Darke has something both hilarious and horrific to say about the decay of a marriage, and he compels the attention while doing so.’ – Sunday Telegraph