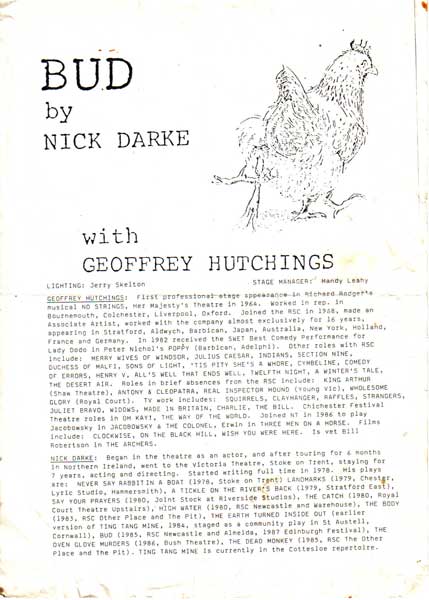 Written in 1985. Originally performed by the RSC.

A one man show/monologue written for the actor Geoffrey Hutchings.

Bud, a fifty-year-old farmer working his wife’s land, has a crisis which leads him to examine “the acid drop scorchin holes in the starched napkin of our marriage.”

The Tell Theatre Company’s double A Respectable Wedding and Bud compliment each other as book-ends to the heaven and hell of marriage.

We begin with an updated 80’s setting for Brecht’s A Respectable Wedding. The happy occasion of a wedding dinner slowly descends into a comic disaster, complete with the furniture made by the proud groom falling apart under warring family and friends being the visual analogy of where the evening is headed for this loveable yet extremely volatile group of mismatched people. Through some marvellously uncomfortable verbal volleys to the perfectly choreographed embarrassment of 80s dancing, the audience winces and laughs along in equal measure with these bumbling, hysterical characters. After all the disastrous possibilities have been exhausted this fun farcical wedding leaves us feeling there is a hope of the happy couple at least attempting to live up to their namesake.

I’m not so sure the same could be said for Nick Darke’s Cornish farmer Bud. Written while the young Darke family were themselves living in a shed on someone else’s land, this intense but comic monologue explores how even the most solid relationship can crumble under the pressures of questions of ownership and subsequently control. In the capable hands of Neil Sheffield, Bud both scares and endears, leaping effortlessly from scornful analysis to surreal anecdote; from cruel self observation to four legged chickens and ley-lines. With a subject and character which could easily swing towards the harrowing, Nick Darke provides a powerful voice and colourful story you are eager to hear and compelled to remember.

First performed by the RSC in 1985, The Tell Theatre’s treatment of Bud (down to the perfect detail of 80’s cornflake box) is a moving and unmissable theatrical experience.