Music was an important element of many of Nick’s stage plays, and he even found time to compose an original opera libretto.

Typically enough, The Lobster (1998) continued to explore Nick’s fascination with the sea: the opera was based around the thoughts of a crustacean upon entering a trap, and featured a female lobster singing about her life.

The opera was performed at The Queen Elizabeth Hall by Nicole Tibbels (soprano) with the Mephisto Ensemble. It was conducted by Christopher Gunning who composed the score, and recorded on the Meridian label (CDE 84498). 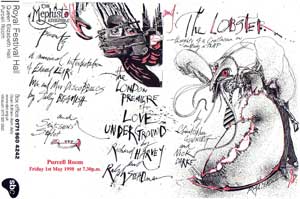